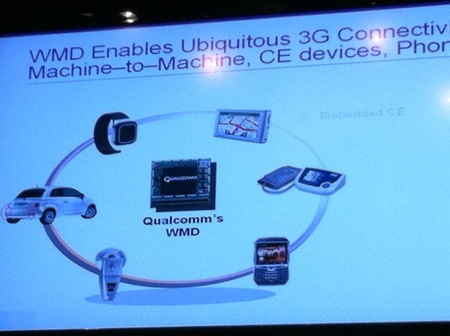 Well it all sounds amazing, but so far it hasn’t really happened. But chip-makers Qualcomm are about to bring that interconnected world much much closer. Used to making high-speed chips for mobile phones, they’ve branched off into making simple plug-and-play chips that can pick up information from an object and send it off into the internet. They’ve just created a series of them – little standalone chips that pick up info from sensors and can radio that data off to the internet.

By the end of 2010, these chips will be certified, and by the beginning of 2011 any manufacturer will be able to buy the chips from Qualcomm, embed them in their device – whether it be a kettle or a pet collar – and get their gadget on the internet.

No kettle company would have had the resources to develop a chip like this from scratch, so Qualcomm’s offerings really opens up the internet of things to all manufacturers.

Initial ideas for use include in cameras – journalists wanting to send video or pictures directly to a newsroom from a camera would be able to do so from a device enabled with one of these chips.
Tracking devices are another big possibility, in hire cars, in prisoner tags, in pet collars…

The Qualcomm rep said manufacturers would be able to get a device onto the shelves within four months of purchasing the chips.

Expect an explosion of devices like this from April 2011…