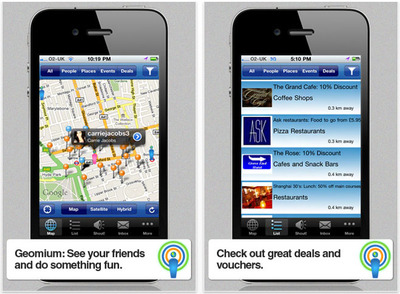 “Facebook just wasn’t made to be a location-based network.” says Michael Ferguson, the CEO of UK startup Geomium. His company on the other hand has been built from the bottom up around the idea of an all-round location service.

Another location-based app and social network? Yes. But here’s why the Geomium team reckon they’re going to go mainstream where Foursquare and even Facebook are faltering…

We mentioned a while back that Facebook Places (the social network’s new location service that lets you share where you are with your friends) just wasn’t getting used that much. There was a novelty flush of first users sure, but since then take-up has been small with lots of the old Foursquare devotees continuing to use Foursquare. Still – despite about 20% of the population owning smartphones, only 4-5% of the population have ever used location-based networks.

But even if there are flaws with other location-based services, there are still mammoth tech names in the field. Given all the big players – why does Geomium think it’s doing something special? What’s its USP? 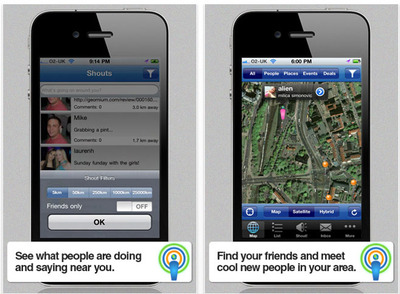 In short a little bit of everything. It shows you where a whole load of stuff is:
1) your friends – see where and when your friends left “shouts” – messages pinned to
2) people you don’t know – see shouts and tips from people around you who you don’t know but might be interested in the same things…
3) venues & events – it won’t just show you venues (which any map could do) it will show what’s happening at that venue tonight by aggregating event information from Evently, Yelp and Qype.
4) deals – you can find online deals for the venues around you. Get the first pint free, get cheap lunches and free tickets for all those events nearby and relevant to you…

Why it’s better than Foursquare: it’s more social – see where your friends are now, not where they were 2 days ago. It’s better for businesses… Foursquare lets businesses reward loyal customers with discounts for check-ins, Geomium helps get those customers to your business in the first place by drawing new people in with vouchers.

Stand-out features
Apart from the general business sense in having a one-stop app for all these “around you” details, Geomium has a couple of features that stand out for me:

1) Deals. The internet loves deals and getting ones that are near you is very good idea. There are lots of popular voucher websites, but this is just a nice way to display them. According to CEO Michael this was one of the most popular features with the beta users.

2) Real-time tracking your friends. The other (slightly terrifying) wow factor with this app is real-time friend tracking. Oh yes. Even if you switch the app off, Geomium can still track you on a map and show you as a little dot pottering around the streets you’re wandering in. It’s more social in that it lets you know where your friends are right now as opposed to where they were 3 hours ago when they checked in somewhere with Foursquare. It’s also very Big Brother of course, and is either fascinating or terrifying depending on your point of view. You can switch this feature off, and set the privacy – everyone/friends/no-one.

It only works in London for now, the updated app appeared in iTunes today – but Geomium plans to launch in other cities across the UK in Q1 2011, with Europe and the US to follow later in the year.