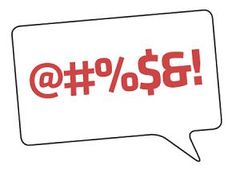 The French do have a reputation for expressing their passions more freely than us Brits. Turns out that applies to tech reviews as well as to matters of the heart. Reevoo.com which publishes user-generated technology reviews from countries across Europe (UK, France, Spain, Poland and Russia) found that the French speaking reviewers were the ones most likely to use swear-words.

They analysed the 1.5million reviews on their site for swear words. These were the results by nationality:

When Brits do get upset, they tend to describe things as either “rubbish” (the most commonly-used insult) or “cheap and nasty”.

The most common causes for bad language are mobile phones, making up 18% of reviews containing swearwords, followed by laptops at 13% of unpublishable reviews and poor customer service at 10%.

0.3% of reviews on Reevoo.com are rejected for having offensive language in them…