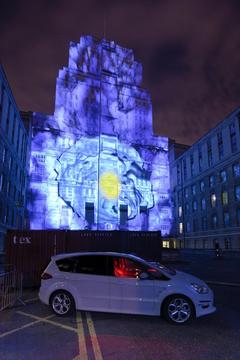 Just how do you freeze a building as iconic as Senate House in London’s Russell Square and get it to look like it’s being scaled by an ice climber? That was the challenge for interactive arts and technology collective Seeper for their latest project.

Rather than put their money into a traditional billboard ad, car giant Ford turned to Seeper to create stunning visual effects for the launch of their latest S-MAX car. Using the latest projection mapping technology and real time 3D graphics, Seeper were able to create the impression that the building had indeed been frozen like a scene out of a superhero movie.

Says Seeper’s Founder Evan Grant: “We built a green screen climbing wall and actually worked with an ice climber who enabled us to create the climb in a more realistic way. We filmed it in a TV studio and then composited that onto the building.”

Those who attended the event, including people who heard about it via Facebook, were even able to take part by shooting holes in the building. Explains Grant: “The audience are an integral part of the experience. The idea is that they can affect the visuals they are seeing. It steps very lightly into the realm of computer game technology with very large joysticks in the form of ice cutters.”

See the sponsored video below to find out how Seeper managed to create the effects for the S-MAX launch.