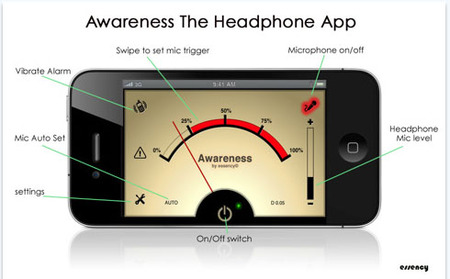 An app just launched for iPhone and iPod Touch claims to make headphone listening safer by letting in a limited amount of outside noise.

Awareness! The Headphone App allows you set the microphone on your iPod or Phone to pick up outside noises like traffic, car sounds or conversations and feed them into your earphones. You can control how much outside noise you want to hear.

Headphone wearers with the app will not be so oblivious to what’s going on around them and that, says Essencys, the British company behind the app, makes it a lot safer to listen to headphones while out and about. “With increasing numbers of people using in-ear and closed headphones, there are serious safety issues caused by their isolation from the world around them.”

The app offers a dial that lets you tune in how much of the outside world you want to hear. These are the features:

It means that users will hear the world around them through the microphone and a headset – a funny concept.

Awareness! The Headphone App is $4.99 on iTunes