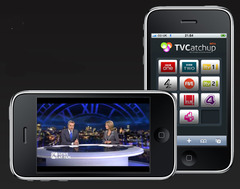 TV Catchup lets you stream UK TV live onto your iPhone. It’s a mobile site that skims the fringes of legality and lets you watch most British TV channels live on your phone including the BBC, ITV, Channel 4 at the same time as it broadcasts on TV.

It’s not really an app – it’s a mobile webpage – which means that anyone with an internet-enabled smartphone can watch it – pretty useful. iPhone users can bookmark it on their home screens (click the + button) so it looks like and behaves like an app, though runs through Safari. Handily, that means it avoids the limitations on Apple’s app store too…

As for the streaming of course – best to do it over wifi, streaming TV is a lot of data.

But honestly, on any phone with a decent wifi connection and a good screen, this is a really fun app and allows you to watch TV while lying in bed, being on the bus or

After a series of court battles, TV Catchup is currently legal, but we note on the TV CatchUp wikipedia page it says that a fresh wave of law suits were launched against it in June 2010, by Channel 4 and Five. Problems come because it’s letting you watch TV as it’s actually happening.

Being a mobile site rather than an app, it’s open to any person with an internet-enabled smartphone.. – pretty useful. And for providing great content for free, it’s great.

iPhone users: go to http://www.tvcatchup.com/iphone on your phone’s browser to pick it up.