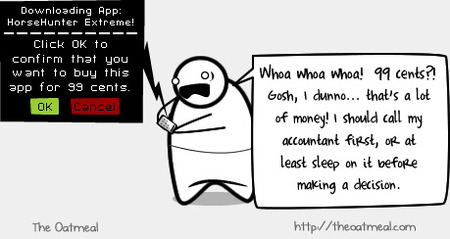 Usually if I thought something would set me back 59p, I wouldn’t blink an eyelid. Hell I pay easily triple that for a coffee and that’s just coloured water in a cup.

But we still have a slight reluctance to splurge on apps. Even as a dedicated iPhone user I still hesitate over any app that costs over £1. That is exactly the mental contradiction that the Oatmeal, that chronicler of geek dilemmas, picks up on in his cartoon today ‘This is how I feel about buying apps’.

I do sort of know why of course: that’s because at heart I still think stuff on the internet is free, so I don’t compare apps with coffee, I compare them with FREE STUFF ON THE INTERNET. Compared to nothing, 59p is expensive. Still, I’ve got 90 odd so it’s not exactly prohibitive.

The Android store is known for having the most free apps, then Apple’s store is probably next with Blackberry and Window’s mobile apps being pretty pricey – in general. Nokia’s Ovi store prices are moderate but they don’t have many quality free apps.

See the full cartoon in its glory here.