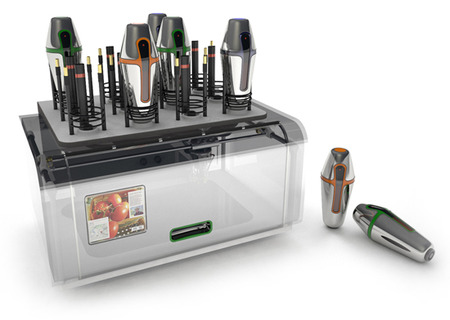 Capable of printing out your dinner, scientists in MIT invented the gadget back in January, and IKEA have just fingered the Food Printer as one product they think will make a big difference to Kitchens of The Future. Not just something for the wacky scientists then.

The Food Printer or Cornucopia Digital Fabricator does a lot more than print pictures of your little brother in food dye onto icing sugar, oh no, it makes the whole thing from scratch, in 3d. Using food molecules as building blocks it constitues a whole meal for you out of ingredients that you have chosen. You can control the flavour and nutritional content exactly.

Essentially, the Cornucopia concept is a 3D printer that precisely mixes foods and flavors from a number of canisters in order to produce something that’s edible (and supposedly close to what you ordered). Able to deliver “elaborate combinations of food,” the machine also has a rapid heating and cooling chamber that purportedly allows for “the creation of flavors and textures that would be completely unimaginable through other cooking techniques.”

IKEA have released a document outlining the future of kitchen design taking into account global trends like scarcity, digitalisation, neo villaging and other scary stuff. Suffice to say I’m just looking forward to the day when I can print out dinner.

One thought on “The 3D Food Printer: why IKEA predicts we'll be printing out dinner in 2040”