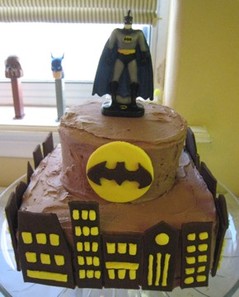 Well, this isn’t really about technology. But it is about cakes so I’m just going to barge ahead with this one. Bakers are creating a massive cake city in Covent Garden London, at a location called The Future Gallery.

In what they claim is an art installation meets bake-off Tate & Lyle have sponsored some wacky artists to fill a gallery space with a city of cake. It will be sort of like Willy Wonka, but in London.

Taking place at the end of August, it hasn’t happened yet. So sadly of course there are no pictures (I just thought I’d give you an idea with the Batman cake up there, because it’s like Gotham city you see…).

“The Cake Britain exhibition is to help encourage creativity with food and will feature fantastic works of food art by renowned cake- ists and artists including David A Smith, described as a ‘young and highly promising artist’ by the Guardian; Prudence Staite, who can create anything you can think of from food; Jellymongers – Bompas & Parr, who design spectacular food experiences often working on an architectural scale and the aptly named cake-ists: Crumbs & Dollies and Lily Vanilli.”

Cake Britain will be on show at the Future Gallery, 5 Great Newport Street, London, from Friday 27th to Sunday 29th August.

Related: What do Jesus, daleks & Siamese cats have in common? they’re all on awesome cakes