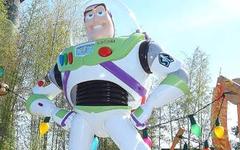 August is a big month at Disneyland Paris for it marks the unveiling of its first major new attraction for several years. Inspired by the trio of films, Toy Story Playland comprises three new rides which aim to make visitors feel like they have been shrunk to the size of toys. Dwarfed by giant blades of grass, oversized toys and huge trees from the surrounding woodland visitors can descend 27 metres on a simulated parachute drop, race round on a roller coaster and zoom through a 25 metre half pipe track that’s a lot like the Hot Wheel toys of the 60s and 70s. And before they even begin they are welcomed to the attraction by a huge fifteen foot tall Buzz Lightyear.

I visited the park a few weeks back and was given a guided tour of the rides. Although they weren’t quite ready, the rollercoaster was being tested on that day, visiting Playland was still a surreal experience. All around are odd giant toys which resemble those owned by Andy in the movies. They are not especially bright shiny and new either, for in keeping with Andy toys they are little worn, jumbled up and in some instances looks broken.

The rides themselves look huge fun. I think the simulated parachute drop will be the main attraction here as visitors fall in a manner that Andy’s plastic toy soldiers do in the original Toy Story film. Guests rise up to 172 metres in the sky and are then ‘dropped’ with the aid of their parachutes.

Visitors then move on to the Slinky Dog Zigzag Ride which is a cute take on the old caterpillar rides. Slinky dog chases his tail with the visitors being propelled over the round and round at ever increasing speeds.

The last ride is RC Racer which shoots guests though a 25 metre half-pipe on a U-shaped circuit.

So how do Disney go about making a theme park attraction? I got to spend some time with two of the key players in the development of this and many other Disney rides, who answered our questions.

Inspired by what he saw at the New York World’s Fair in the mid 60s Tom Fitzgerald sought a career in creating theme rides. He is now Executive Vice President and Senior Creative Executive of Walt Disney Imagineering. He was accompanied by another imagineer Chrissie Allen, who has played a pivotal role in the creation of the attraction.

So how then do you create themed rides?

1 Choose what kind of attraction is required

According to Tom Fitzgerald Disneyland Paris needed a family friendly attraction. ‘Lots of the other attractions were a bit older, so we wanted something new that would appeal to kids.’ The park’s last major ride, based on the move Finding Nemo, is a semi-lit high octane roller coaster aimed largely at adults and older childcare. So it was decided that the attraction needed to be something all the family could use.

When Disney decided to bring a new attraction in Paris they had to chose the movie to base the rides on. This is apparently a lot trickier than it sounds. According to Tom Fitzgerald ‘the movie had to fit the family friendly brief for the attraction – i.e. something that would appeal to kids.’

Secondly that movie has to have a degree of longevity. Although the success of a ride isn’t predicated on how well a movie does at the box office, it does make sense to pick a movie – or indeed a franchise as Hollywood calls them, which will be around for a while.

According to Fitzgerald the choice this time round was narrowed down to an attraction based on Toy Story or The Incredibles. Ultimately Toy Story won for a number of reasons including; popularity of the movies, the success of the initial concepts and the way in which the ride would open not long after Toy Story 3 had appeared in the cinemas.

There are journalists who suspect that the process is a little more cynical than that, and that rides, merchandise, and other commercial propositions actually shape the movies Disney produce.

Tom Fitzgerald denies this but admits to having seen the development of Toy Story 3 and being inspired by. He does argue though that ideas of themed attractions are never written into the story of films. He claims that the concepts for attractions develop in tandem with new movie projects.

Occasionally rides become movies. Pirates of the Caribbean started as a ride in the 60s and then inspired the series of phenomenally successful films.

3 Come up with some concepts

This sounds like the fun part as Disney’s imagineers brainstorm the concept for the attractions. Apparently the team spent a great deal of time on EBay collecting toys from the 1960s and 70s to see whether the could develop them into rides. Ultimately the decision was made to create a space in which humans are shrunk to the size of toys and a series of concepts sketched out. All kind of questions are asked at this point. So for Playland it was… What would Andy’s role be in the Playland? How would Andy have his toys? Which of Andy’s toys should the team focus on to build the ride? Eventually the team came up with three concepts they were happy with.

To decide what kind of rides the attraction should have team members go on what must rank as one of the best work experiences of all time. They travel around the world trying out the latest rides and sometimes these provide inspiration for the finished attraction.

Tom Fitzgerald believes that there were two ways in which attractions might change in the future. ‘The rides are increasingly becoming more software driven. For some rides we can change them simply by updating the software. We are also aware that the nature of storytelling has changed. Visitors want more interactivity and more control of the rides. However kids still want to meet real character and be wooed by that experience the same as they have always done.’

4 Get the film director on board

Toy Story director John Lassiter was part of the proposal from very early on. The director spent time considering the concepts and then when the props for the attractions were finally built he advised on the detail on models, for example making minor adjustments to the eyes of some of the characters. Apparently he had quite a big say in the look of the Slinky Dog ride.

5 Make a 3D model of the attraction

The next step is to create a version of the attraction in miniature. So a team was commissioned to make the model as lifelike as possible. Fitzgerald and his team then spent time checking details such as the flow of people through the attractions, where they would stop and what they would look at. Small cameras were also employed to get even closer to the figures and key refinements were made. I got to look at the miniature model and was struck by the attention to detail. It really does resemble the real thing.

Once the characters and their sizes have been agreed on the models are then constructed. They are often built in different places and then shipped to the site. So for example for Toyland Buzz Lightyear was made in Florida while other props for the attraction were manufactured in Europe.

7 Build the rides and get testing

With most of the concept work done the team then gets on with creating the real version of Playland. It has taken nearly two years to make Playland and position not just the rides themselves but all Andy’s toys such as the solders, a ball, building blocks and a balsa wood plane. Special care and attention is taken to ensuring that visitors have a seamless and interesting journey through the attraction. So photo opportunities are created en route and in many of the waiting areas for the rides are special features.

With the rides built then the team gets testing. This is obviously to ensure the safety of the ride and can take several months. When the attractions officially deemed ready it is then given over to the Disneyland Paris staff and is readied for opening.