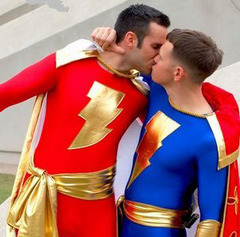 Gay and lesbian people are more likely to read blogs and more likely to spend time on social networks said research published today by the American Survey Company, Harris International, and it just got me wondering why..

“Gay and lesbian adults online today are among the nation’s most loyal and heaviest blog readers and social network users” concluded the report.

Check out the stats they discovered below then have a quick look at my reasons and see if you agree..

The report found that a majority of gay and lesbian adults read blogs online. More than half (54%) of gay men and lesbian respondents read some type of blog, compared to only 40% of heterosexuals. They are more likely than straight people to read all sorts of blogs – news blogs (36% compared to 25% of straight people), pop culture blogs (25% to 16%) and of course – gay blogs: 35% of lbgt people read gay blogs.

Gay and lesbian people are also more likely to be members of social networking sites. Here are the findings:

The Reasons
The stats are interesting, it just made me wonder why gay people are more into blogging, social networking and well, the internet generally. I could think of 4 reasons

1) If you don’t like the real world very much – you’re much keener to jump into a new one. It’s like the way the disenfranchised people of Europe dashed off to America as soon as it opened up back in the 1800s. Well it’s sort of like that. Basically the lure of a New World is much stronger if you don’t like the old one. And let’s face it, a lot of the real world is not a gentle place for gay people,so the new vistas opened up the virtual one seem more appealing. To be honest this is probably the same reason a lot of awkward geeky straight kids who don’t love their real-world lives enjoy the internet too.

2) If you belong to a very thinly-spread community, (whether that’s gays or Marvel Comic afficionados) the internet is an important way to connect with people. It’s a quick easy way to build up networks.

3) Gay people are more used to having to look for what you want… There is a very slim chance that Mr/Ms Right is going to the boy/girl next door. Gays are much more used to having to trek around looking for the other gay in the village etc, so having to do a little investigative googling to find a good music review is not that much of a hurdle, hence the fact that gays are a bit more into delving through the blogosphere.

4) The internet is a place to recreate yourself.. just look at World of Warcraft. Okay, that’s not a very glamourous parallel but the internet is a place where it’s very easy to tinker with different identities – something gay people often have to do to come to terms with themselves. Social networks are a great place to do that. And while h8ers may h8.. at least no-one can punch you.

What do you think? Opinions welcome…