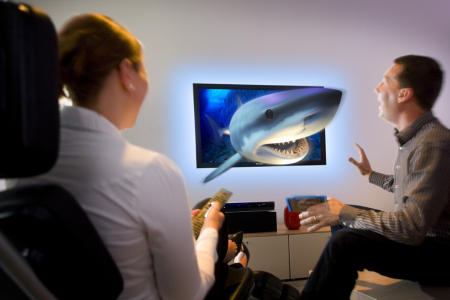 I know, that sounds a bit like a Daily Mail headline, but whether 3D makes you feel a bit vommy is a hot issue in the gaming community. Sony updated their users advice for the PS3 yesterday to warn against “eye-strain, eye-fatigue or nausea” when viewing the technology.

And now an optometrist told VG247 blog that he’s pretty sure that watching 3G images over a long time will cause “eye-strain, eye-fatigue and nausea”. Just one and a half hours of watching something 3D was enough to cause problems said James Sutton, eye specialist and MD of British eye health company Butterflies Healthcare.

While cinema films are about that length anyway, the 3D-vomit issue become more of an problem as people get 3D devices in their homes – TVs and games consoles – and watch them for much longer.

Reactions to the post were mixed. One commenter agreed: “I know a few ppl who felt sick, i had a headache after Avatar.” Though one said his nausea could have been down to something else.. – “I felt a bit ill after avatar… not sure if that was the film or the 3D though.” And another declared that he was going to game in 3D and clearly didn’t care if it made him throw up sometimes: “im not bothered by it and will be happily playing my games in 3d very soon”.

From the VG247 article, it seems that the evidence behind this statement is anecdotal than lab-tested science, and as the optometrist points out it would just be a short-term issue.

So we’re not saying “don’t watch 3D TV”, we’re just saying there could be a market for vomit-proof PlayStation covers.

One thought on “Can 3D TV make you feel a bit sick?”