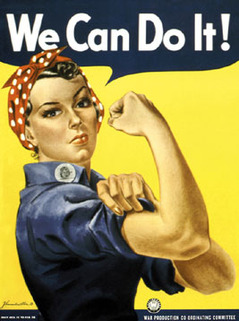 Skimming the interwebs, I came across an interesting article which lays out the experience of the feminist geek.
As a feminist geek myself, admittedly a little more softcore than I might be, this article by Mary on GeekFeminism.org pinpointed several key issues.

Here are the bits that rang true with me. Do you? Take the poll below.

Geek women experience more sexism and stereotypes because of the areas they work in female geeks (feminist or not) tend to work in male-dominated environments where men often suffer from 1950s-level delusions about What Women Can Do.
But conversely the gender pay gap is smaller in tech jobs which seem to be more egalitarian than traditional companies.

Sometimes geek women internalise those sexist attitudes: and can be pretty scathing of more traditional women finding them trivial and annoying. It’s not an uncommon experience for us to have felt more comfortable socially with geek men than with non-geek women, and to have largely been friends with geek men at times.

Often the geek identity is more important than the woman identity: the writer has some pretty moving stories from school years of getting persecuted for being a geeky kid. That’s the sort of identity-defining experience that makes a mark.

Geeks don’t believe in social conditioning I love this idea.
Mary suggest geeks believe themselves highly rational and independent of social influence. They think that how they behave is a product of rational behaviour rather than any social constructs like gender.

Have you experienced any of the above? Click any that you agree with below