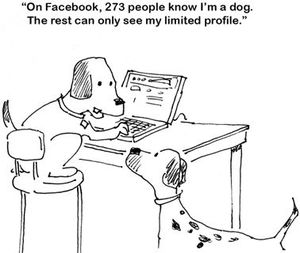 Facebook has been creeping towards openness for a year or two, taking several key steps towards pushing more content into the public domain. Today, a certain Ron Bowes of site Skull Security got a lot of attention for publishing a Torrent file of all publically available facebook data. That’s the details of over 100million people, their profile information, their facebook urls, their friends…

Of course it’s all available online anyway, but it just brought the whole topic of data privacy to the attention of the national media.

Here are four key events I can recall that were part of Facebook’s push towards opening up.

1) The News Feed
Don’t know if you remember the fuss when this was introduced back in 2006? The News Feed didn’t make anything available that you couldn’t have already found out, but it did pull all the information together in one place, prompting everyone to complain about Big Brother style surveillance. Obviously it was too good to complain about for long, but it was a psychological step towards the idea that your personal activity is public news.

2) Making profiles public by default
A big deal, this was announced back in December 2009. Allowing Google to index public pages, it was the key part of Facebook’s push towards openess. As a bit of positive publicity for it, Mark Zuckerberg opened up his facebook page and we all got to see pictures of him on a boat with his girlfriend.

3) Linking profile interests to pages
This was a sneaky move that Facebook didn’t announce beforehand. Suddenly your profile page prompted you to link your interests to public pages. Your list of favourite bands was now a list of links to publically visible pages about those bands. Anyone holding out was banned from editing their own profile page.
Okay so it’s not all sensitive information, but still, it pulled what was once more private information into the public domain.

4) The Like Button
Part of Facebook’s new strategy – after opening up their site to the internet, they now want to bring the internet into their site. The like button has been installed on many websites outside Facebook,. It’s all opt-in of course and a neat, quick way to share content with your friends, none the less, this lets Facebook tell your friends what you are up to out of their site as well as in it.