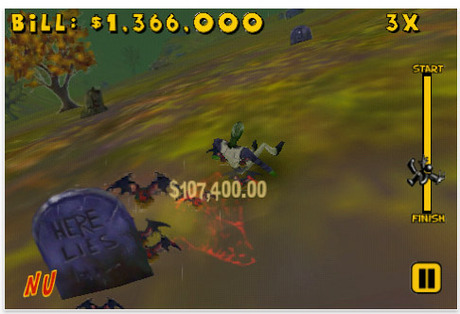 If you’re into goofy action cartoons and watching animated characters getting bashed up, this is the iPhone game for you.

iHurt takes inspiration from Loony Tunes and cartoon violence to create a game where the more you hurt yourself, the more you win. The gameplay? “Steer your character down Mt. Spinebreaker while hitting as many objects as possible in your quest to rack up the largest hospital bill in the history of the iHurt Championships!”

Description
You’re falling down a hill, the idea is to bash your character into as many trees, rocks and mulitpliers as possible to maximise the hospital bill at the bottom of the hill.

The Good
The visuals are great, it’s genuinely quite exciting for an iPhone game with the ground rushing below your feet and trees flying past to either side
Accelerometer control by tilt is intuitive and easy to do
Integration with top scorers from twitter/facebook is a nice

The Bad
Screen reaction is a bit slow to taps
Limited choice of character and scne
You look like a bit of a twat moving your iPhone around like it’s a steering wheel.

Word of warning folks:
“It’s also important to note that iHurt is a virtual simulation, a game, and should not be recreated at home in any way. The actions in the game are just what cartoon characters do for a living, they fall down and go boom. They are professionals in the world of slapstick, and also we really don’t want to be sued by anyone.”

Conclusion
It’s not at the level of top games like PocketGod – where the endless variation makes the play really addictive. But this is well visualised and the gameplay flows smoothly. Cartoon link-ins are fun.