Nothing like a personality test to get people opening their wallets, or rather, making micropayments over iTunes. Psychology, an app from Chicago has just sold 1million units worldwide putting in the top 100 trivia games in the app store.

Psychology consists of 12 separate personality tests, based on psychometric principles, the makers tell us:

“From romance to work, these entertaining tests add to the fun by offering a glimpse at a user’s psychological makeup. Though originally intended as an app for individual use, Psychology has become popular as a party game, which has further extended the app’s reach within the market.”

The makers claim it is “insightful as it is entertaining”, though from a quick skim, I don’t think it’s going to deliver any mind-blowing results and it has only got an average of 2 stars out of 5 on iTunes. (And that eye icon is scary.) 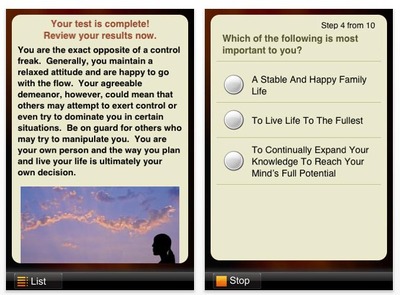 Anyway, you know if you like those personality quiz things in magazines you will like this. I’m itching to find out if I’m a control freak now.

I’ve always been quite interested in Psychology and therapy apps (therAPPy eh?) and I think there’s a lot of potential in using apps for personal measurement and assessment. People are always interested in themselves generally, and I have a hunch iPhone users are even more interested in their own psyches than normal people.