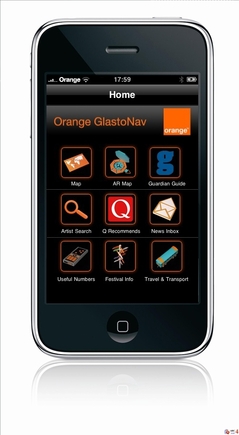 There will be two versions of the Orange GlastoNav application with the simple one available across many different handsets featuring a map of the festival along with the line-up. The iPhone (3Gs-only) version will have some extra augmented reality features which make the festival guide more visual.

In the Augmented Reality version of GlastoNav, information is layered over the picture shown from your viewfinder, helping users navigate around the 1100 acre site. Festival goers will also be able to see who is playing ‘now and next’ on each stage. Facilities such as toilets, information points, cash machines and bars will appear as pop-ups on the map with ‘distance from’ indicators. In addition to these existing locations users will also be able to add their tent location to the map to create a GPS tent locator, ensuring they can always find their tent at the end of the night.

Some people (ADC) are raising concerns about the burden put on the 3G network by a lot of people in a small place streaming AR content and video, so it will interesting to see how the networks cope with this and the IBMSeer Wimbledon app.

GlastoNav the simple version is available to download from today by texting the shortcode GLASTO to 65101. The Augmented Reality iPhone version will be available from the Apple App Store during the week of the festival. Both are free.