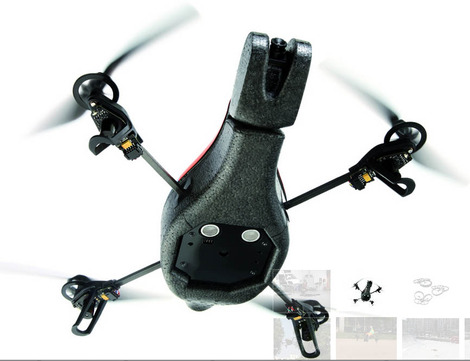 It set them all cooing at CES this year, and now the iPhone-controlled toy helicopter will be available for sale in the UK from the middle of August.

The AR Parrot Drone is a foam and plastic toy helicopter with built-in cameras that you can operate from an app on your phone. It connects to your iPhone over wifi, and can be steered (pretty intuitively) by tilting your phone to the direction you want it to go. The Parrot drone is a steady flier capable of hovering, lifting and flying pretty high (within it’s wifi range).

The Parrot Drone was launched last night in London by its French makers in a pretty neo-classical church. The effect of this thing zooming around in front of paintings of the last supper made it look a little bit like the Holy Spirit gone wrong, however the space was ideal for showing off the strengths of the Drone. Though it comes with an extra plastic shield for outdoor use, I think it is going to do better inside than outside where the wind is a problem and the wifi signal weaker. 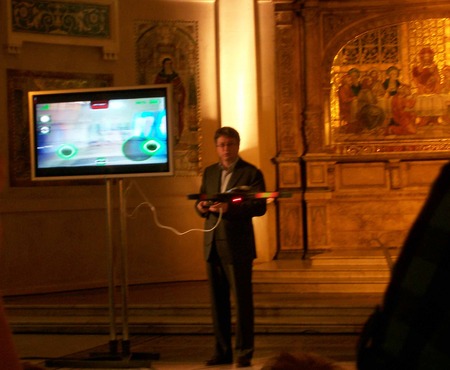 The French CEO explained what happens when the drone leaves the range of wifi: “when he moves out of wifi, he drops himself”. And this was demonstrated by one of the journalists who flew his drone too far and it sort of fell out of the sky in an undignified crash landing. We were told that the wifi range in open field was 15m, and in an office or indoor situation it would be 20m. The Drone acts a bit like a rerouter amplifying the signal that it gets.

But the point of the helicopter is not ranging far and wide and taking surveillance footage of the surrounding areas, it’s more about using the nifty controls at close-range to play games. Augmented Reality games (hence the AR of the title).

On the screen of your phone you can see live footage from the cameras in the Drone (played at 10fps). And, superimposed on the image are targets and gunfire and bomb-blasts, letting you play little games if you have a friend with a drone.

The gaming aspect looks pretty exciting, though still slightly underdeveloped. As the CEO told us, the API for the drone is available online so they’re clearly looking for people to design new games, perhaps ones that could be played by yourself. There’s no Android app yet, but again the API is open and ripe for someone to make one.

It’s a toy, the CEO said, and watching the things zooming around inside, they sure looked pretty fun: landing on people’s heads and knocking over beer bottles. It would a laugh around the office, that’s for sure.

The AR Parrot Drone will be on sale in HMV for £299 from 18th August
See more on AR.Drone.com