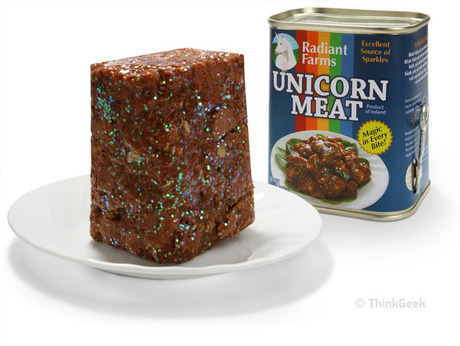 Yes, this is the oddball story of the day…

Internet shop ThinkGeek received a 12 page long cease-and-desist letter ordering them to take down one of their products – their sparkly “unicorn meat” pate. Not because unicorns don’t exist, or because it was offensive to mythology lovers or because people were getting the sparkles stuck in their teeth, but because the National Pork Board felt it ripped off one of their slogans.. “The Other White Meat”.

The ThinkGeek entry proclaims Unicorn Meat is “The Other White Meat” and that slogan, I’ll have you know, has been trademarked by the Pork Board.

Anyway, ThinkGeek think they’re pretty well covered by a parody clause, and by the fact that unicorn meat doesn’t exist and that the entry is in fact an April Fool’s Joke. (I’m not laughing at the National Pork Board too much, I’ve been there and fallen for the lols too. At least I didn’t employ a lawyer to send a cease and desist letter though, phew.)

See their blog about the Cease and Desist letter here..

See the Unicorn meat pagehere. They describe it: “Caviar is so 1980s. Unicorn is the sparkling, crunchy, savory meat of today’s elite.” Nom nom nom!