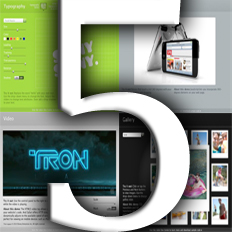 Steve Jobs loves HTML 5. We know that. He’s probably got HTML 5 pjs and HTML wallpaper, he probably dreams in HTML 5. He’s sure it’s the future of the web, and you’d be hard pressed to argue with Apple‘s captain.

And as if to prove a point Apple today revealed a web-showcase of just what the new web-standard is capable of.

An instantly loading video, that you can’t scan through, but can scale dynamically (which is neat if not almost entirely useless). A natty text editor that showed the way in which text that had previously been jpegged into webpages could now be actual text.

An audio player and impressive 360 spinning image jobby — where you can scrutinise an iPod touch from all angles, as if it were there in front of you.

The functionality isn’t groundbreaking but the way in which it’s achieved is, as code. Code that you can just drop into a webpage, like you would a br clear=”all” or target=”self”. Bonkers right!?

You can check it out yourselves here, or if your browser isn’t up to it right away you can have a gander at our gallery.