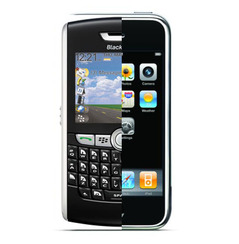 You know when you hand your iPhone over to your Blackberry-using friend and they push the screen really hard, waiting for it to click? Or push four letters at once because they can’t exactly deal with the touchscreen keyboard?

Yes, people get so bound to the way their phones work that they can barely think outside it. It seems that is what has happened with the US President. President Obama – who famously insisted on keeping his Blackberry on becoming President – announced, almost proudly, to a whole room full of people yesterday that he couldn’t work an iPad or iPhone.

Though Apple projects are supposed to be intuitive, it is hard often to cross platforms. Even if you are smart, like Barack certainly is, it’s a question of time and we guess he’s got a lot on his hands.

Obama also said that kids should spend less time on the Xbox and the iPod and more time getting educated. Well, unless they want to become computer game designers that is, in which case I’d advise they get all the practise and experience they can fit in.