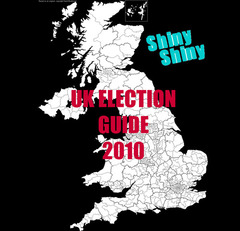 Twitter will be my first port of call on election night, starting at 10pm and continuing until my reddened eyes close and my iPhone, open at the Tweetie Twitter app, falls out of my hand and lies still on the floor till its back-lit screen flickers off. Given the big role the micro-blogging site has played in the run-up: pushing news stories (#phillipastroud), creating some potent memes and hashtags and generally acting as a brilliant news compiler.

Chuck in the fact that Twitter updates every second, – it will be on fire (metaphorically) on election night.

The best way to follow a breaking news event on Twitter is to search for a particular hashtag and just let updates from all over the site filter into your screen. The best comments and links get retweeted a lot so don’t worry about missing them.

#GE2010 – slightly shorter than #ukelection, thus slightly better.. more room for pith. But while of course it’s short for General Election 2010, it sounds like the name of a robot so it might be less active.

#nickcleggsfault – an oldie, but a goodie, there might be some occasions which merit the use of this. See how it was used before

#philippastroud – the tory parliamentary candidate’s name trended on twitter on Tuesday 4th March after Observer revealed she thought gay people had demons in them. if she gets in I reckon we can expect a flurry of tweets on this hashtag again.

#toryfail – obviously a popular one among non-tories, this is probably one to check for labour/lib dem supporters.

#ukvote + the first half of your postcode will let @tweetminister create an unofficial exit poll..

#justinbieber – no only kidding.

It’s fairly certain new ones will crop up during the election depending on how votes swing.

Add any other recommendations in the comments..