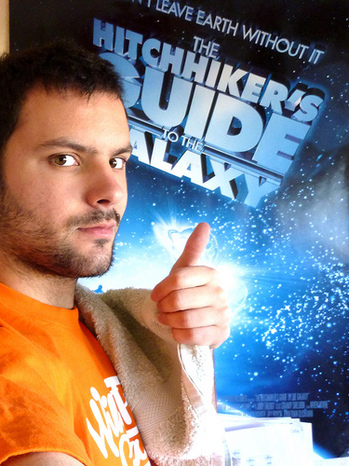 It’s Geek Pride day and it’s also Towel Day. It’s Towel Day because this is the day Douglas Adams fans celebrate their love for the sci-fi authour and his book and wear a towel to show it. They wear a towel because of a passage at the beginning of HitchHiker’s Guide to the Galaxy which extols the virtues of towels. It’s a long passage. We quote only the first sentence.

“A towel, it says, is about the most massively useful thing an interstellar hitchhiker can have.”

Adams fans probably also chose to wear towels because it’s a bit, like, random and that’s the whole essence of Douglas Adams.

How much will you celebrate Douglas Adams?

1. By discreetly tucking a small towel into your bag – you know it’s there, but no-one else does. This is like a quiet personal celebration. [3/10]

2. By carrying a normal hand sized towel over your arm, as if you were just walking somewhere with a towel – those in the know will clock the towel and smile at you. Other people will assume you are a waiter or a hairdresser. [4/10]

3. By carrying a full-sized bath towel with you, in a prominent position.
– still it’s not clear that you are celebrating Towel Day, you could just have forgotten your gym bag and be carrying your towel with you in a convenient manner. Still, Douglas Adams fans will be all over you. [7/10]

4. Putting a full-sized towel over your head and wearing sign saying “Happy Towel Day World!” and maybe a link to the Wikipedia page. – this the way true fans will wear their towels, those in the know, and bewildered (perhaps scared) passers-by may well look it up on the internet and find out. You will have spread the message. [10/10]