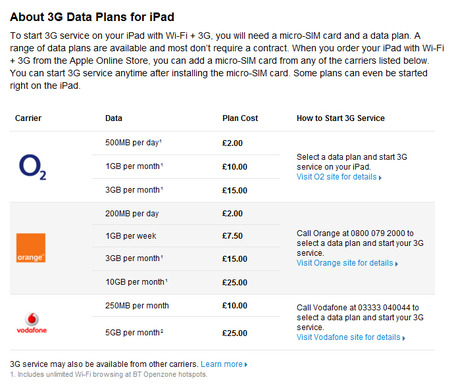 Apple’s 3G iPad, on UK preorder from today, will come on three UK networks according to a page on the Apple website here. But how do the iPad prices stack up for rivals Vodafone, Orange and O2?

That wifi-only iPad is going to end up a lot cheaper, but if you do want to be able to access the internet on your ‘Pad while out and about, it’s worth checking out the deals because there are some serious discrepancies. Stats are in the image above but we just broke it down below.

NB – the iPad uses micro-SIM cards, not normal sized ones, but you can buy no contract micro SIMs on pay-as-you-go deals as well as the deals outlined below

Best deal for low internet use = O2
if you want to use the iPad when you’re out from time to time, for low data stuff like email and websites, then go for the O2 1GB for £10 a month deal. It’s the cheapest monthly deal going. Alternatively, if you know you’ll be using it out on a particular day, top up with the O2 500mb for £2 for one day deal.

Best deal for high internet use = Orange
if you’re going to use the iPad out and about and plan on some data-eating activities like streaming video, then go for the top data deal, the best one is that £25 for 10gb of data a month one from Orange.

Best overall – Nice effort from O2, but Orange have the greatest range of price plans and the most bang for buck on the top paying plans.

See more on the iPad page on the Apple Store