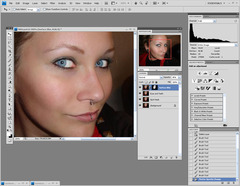 We’re familiar with photo-editing software recognising our faces – programmes like iPhoto or Picasa will run through your photo albums auto-tagging your friends, after you’ve tagged a few yourself. But the idea that photo programme could also improve your friends’ faces is a new one and has just been trialled by a computer vision specialist in the University of California as reported by the New Scientist.

It’s not like the software developed by Neel Joshi would remodel your nose or make up for a bad hair day or anything. But it would fix problems with the photo – blurriness or shade – by sharpening up facial features according to the stock image they had of a particular face.

If you identified a blurry face in a photo as “Steve” the programme being trialled by Neel Joshi would use an algorithm to find images of Steve in similar poses and adjust the picture to give a more visible and clearly defined image of Steve’s face.

The team have made the software but it’s not yet commercially available.

This will be great for Paparazzi and anyone else who has a shaky hand on the camera.

One thought on “Photo software doesn't just recognise your face, it improves it”