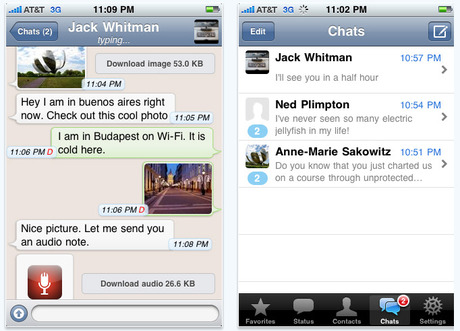 I always used be jealous of the Blackberryers and their Blackberry Messenger service. BBM, as they call it, let them have instant chat over the internet with their friends. Okay so it’s just like speeded-up text messaging, but it is free and it is faster and because things pop up in an easy to read format, people actually do chat back

Well, now thanks to WhatsApp Messenger, this instant chat is on its way to a host of other platforms. They’ve opened an iPhone app and an Android and a Ovi app are coming out soon – wicked. Blackberryers don’t need to do anything, they can run it out of Blackberry Messenger, they’ll just see their iPhone owning friends pop up in their new chatroom.

This adds impressive extra functionality to phones and the cross-platform nature of the app makes it triply useful.

Other nice features include being able to see when your message has been sent and when it’s been read. You can take, upload and foward on attachments like images and videos and it’s all nice and speedy.