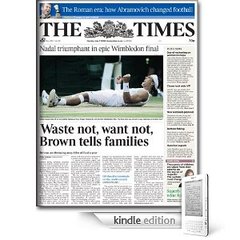 As newspapers and magazines rush to create iPad editions for Apple’s sleek multimedia device (which we hope will arrive in the UK some day), it seems their efforts at readable e-editions have been pretty poor to date.

Flipping through reviews of newspapers for the Kindle on Amazon it seems that papers haven’t really grasped how to make the e-reader editions that are worth the money they are charging for them.

Newspaper websites which are nearly all free seem to provide much better services than the paid-for eReader editions on the Kindle. Particularly poor seems to be British paper The Times which gets a measly 2.5 stars out of 5 for its Kindle offering.

Criticisms include:
a) poor design – the front page only has one story on it
b) UK subscribers have to pay $22 a month to subscribe, US readers only $9.99 – bizarre for a UK newspaper
c) UK subscribers don’t get pictures with the stories
d) A lot of content from the print edition, arts coverage for example, doesn’t end up in the Kindle version
e) The section divisions are too big and not useful for finding content

We’ve rung up and asked about the weird subscription model that penalises UK readers, but have received no answer.

Comments from the Amazon page of the The Times’ Kindle:

from Robert D Glover: “I had high expectations for The Times when I subscribed. Now after two weeks, I’ve canceled my subscription. Astonishingly, reading The Times feels like reading a tabloid paper sprinkled sporadically with occasional real news items. […] In the Kindle edition it is impossible to know which headline refers to a meaty article versus which headline when clicked will lead to a dumb little blurb about a pig farmer who did something interesting with or to his pig.“

from Gav: “I live in the UK and use the kindle most days. I’ve been trying out the Times subscription for a while, but i find it lacks a little something. Pictures. […] come on news international, i think you need to start delivering the pictures as it helps with the experience and engages your audience..“

from P. McLachlan: “This UK paper is $9.99 a month for Americans but over twice the price if you live in the UK, plus Americans get images but UK customers do not.“

Some review are much more positive – highlighting how convenient it is to receive the paper everyday without having to go to a shop to get it, but most agree that the conversion to the Kindle format has been half-hearted.

We hope newspapers get their act together in designing good e-Editions for tablet and eReaders. Given the emphasis on devices like the iPad it seems silly they have put so little effort into making them work.