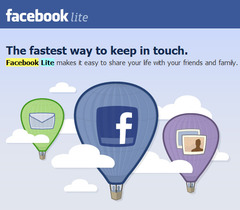 Seemed like a good idea at the time, but Facebook have just dropped their experiment in creating a stripped-down easy-to-access version of their site. Facebook Lite as we wrote about here on its launch was intended for people with poor internet connections, or those who simply dislike the clutter and complexity of full-fat Facebook.

They announced the withdrawal on their Facebook Fan page, saying just:

“Thanks to everyone who tried out Facebook Lite. We’re no longer supporting it, but learned a lot from the test of a slimmed-down site. If you used Lite, you’ll now be taken to the main Facebook.com site.”

There were no reasons given, but we assume low take-up was the key one. Perhaps lack of publicity too. Facebook lite got covered in the geek press, but if you were tech savvy enough to know about the Lite version, you are probably the kind of person that likes the rich, complicated experience that Facebook standard gives us.