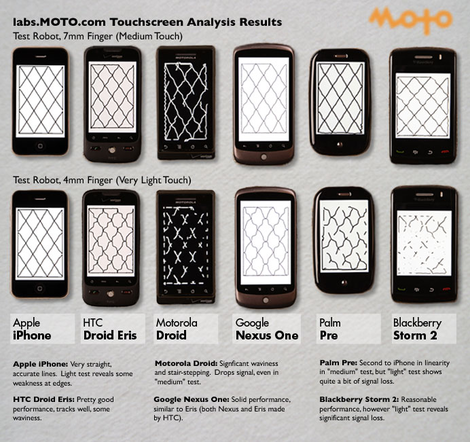 That iPhone touchscreen was what got me the first time I used it, and it’s not just a hunch that Apple’s touchscreen is better than other devices, it has just been proved. By a robot.

We’re not saying it’s a better phone – there are lots of different criteria for that, but we’re just saying the touchscreen is more accurate. And because it knows more accurately where your finger is, that comes across as more responsive.

The test compared an iPhone with a number of other touchscreen smartphones: Google Nexus One, Motorola Droid, Palm Pre, HTC Droid Eris, and BlackBerry Storm 2, using the using the SimpleDraw application on each.

Apple Insider reports: “The iPhone is in first, followed by the Google Nexus One in a distant second place.”

“The test was done with both a 7mm robotic “finger,” for a “medium touch,” and a 4mm robotic finger to represent a “very light” touch. In both tests, the iPhone was found to have straight and accurate lines, with some weaknesses at the edge of the panel with the light touch.”

The Motorola Droid came out worst. Test results in the image above.

One thought on “Yes the iPhone touchscreen is the best, by far”