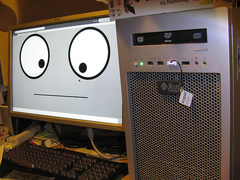 Okay, I don’t exactly think my computer is a friend, but sometimes, I do treat it like a person. I say “come on, come on” when it’s going slow, I give it rest when I think it’s getting “tired” and sometimes I give it a case massage and.. only kidding.

I only mention this because psychologists in Harvard University have done some research into why we treat some non-human things as if they were humans (or anthropomorphise them, to use the correct term). We do this to dogs, to the economy and to computers too according to the research team.

We think our dog is embarrassed or that the stock markets are fragile or that the computer is huffing. And the reason? a) it helps us understand the world, b) we’re lonely.

We don’t know why the housing market suddenly collapses or why photoshop has stopped loading but if we imagine the economy or the computer as a human being then it makes more sense for it to be acting incomprehensibly. It’s just like your boss/dad/sister.

“One way to make sense of it is to treat it like something familiar, which is the human form,” chief researcher Dr Adam Waytz told LiveScience.

And the lonely thing? Well we feel less alone in the world if we’re surrounded by other people, and if there are no other people? well then, we just like pretending our computers are other people.

People who were lonely were more likely to think about God

On the contrary people in strong social groups were less likely to see human characteristics in people outside those groups. “Participants who attended Waytz’s psychology studies with a close friend instead of a stranger, for example, were more likely to deny that other individuals had human capacities like the ability to feel pain.”

So anthropomorphising – ie seeing human charactertics where there aren’t any is generally a good sign, making the world seem warmer and making you feel more empathetic towards and the people and things in it. Your computer understands.

See more on this on LiveScience
[via Livescience]