If you are lucky enough to possess an iPhone 3GS run to the app store right now and get this app. 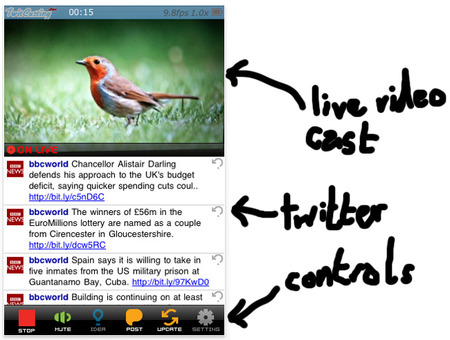 Like Twitpic – but with video – Twitcasting brings TV to Twitter. Shot with your phone’s camera in short bursts it’s not exactly high quality but it’s pretty fun and lets you capture short videos and get them out to Twitter live. Literally live. It’s good. Soon you won’t just read about what people had for breakfast – you’ll be able to watch videos of them eating it. Live.

How it works
After downloading the app, link your Twitter account to Twitcast site by signing in here and then shoot away.

The screen on the Twitcasting app is split into a video recording screen and a twitter feed. Hit “Go Live” to go live and as you shoot the video a text box pops up suggesting you post a link to livecast to twitter. Any of your followers can then click on the link and go over to your video channel on the Twitcasting site – just the same way that TwitPic works. The livecast switches off if you receive a phonecall.

The website grabs @replies on Twitter and posts them as comments under the video – it’s pretty cool, it also archives your videos just like Twitpic does with pictures.

Why I’m a big fan
Sure you’ve always been able to link to videos uploaded elsewhere on Twitter but this is real-time! and real-time is what makes Twitter so exciting. Okay so breakfast may be one of the things people might live-cast about, but it would of course be amazing for live news.

Of course this works best with a wifi connection given the data flying around but they claim it works on 3G too. We imagine that the Twitcasting app will get onto Android, Blackberry and other platforms too. In fact when it gets onto a phone with a better camera that will be great too, improving the quality of the films.

This app is still early stages and a few things could be improved: having a back catalogue of your videos on the app would be nice, and perhaps a tab to let you see your friends’ Twitcasts would be nice too.

See our glorious Twitcast about Twitcasting.