Okay we admit we haven’t tried this app out yet – it’s not out in the UK – but we’re dying for it to come over after reading the drool-inducing reviews from the US.

Did you ever want an app to turn your iPhone/Blackberry into a helpful information-fetching servant? I know it already is one, but Siri, this new app on the block makes it even easier for your phone to do your bidding.

Issue Siri a spoken command, as you might to an obedient minion, and it comes up with helpful suggestions, searching the internet so you don’t have to. See the helpful illustration below: 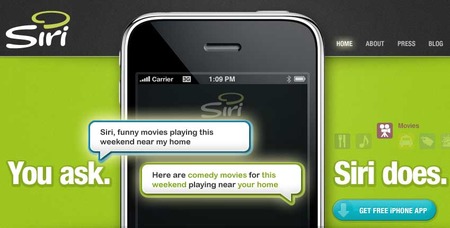 See the clever app has inferred from “funny” that you mean “comedies” and from “near my house” that you want it to filter the information by location. And it does. Wow eh? In other examples you can ask it: “What will the weather be like tomorrow?” and it replies “Here is the forecast for Chicago IL (mm, not so nice, you may want to bring you umbrella..)” adding a friendly extra tip like the sweet thing it is.

So as the Siri site puts it, the app saves you lots of time tapping through links and new windows on the browser on your phone – it’s your virtual PA.

Search engines are good but we need more, says Siri: “We need software that is specifically designed to help you get things done — a “Do Engine” rather than a search engine: A virtual assistant.”

They sketch out virtual-assistant enabled future:
“You will soon pick up your phone and start asking your assistant things like “take me to live CNN news,” “send my dad the latest John Grisham book,” or “tell Adam I am running 20 minutes late,” and you will then watch it all happen. This evolution towards simplicity of interaction will reduce the barrier to almost everything you use your mobile device to do.”

Okay amazing – we’re sold, and Siri have put one year and $24 million into getting this right – so we’re prepared to think it’s good, but the flaw with anything to do with voice recognition is Getting It Wrong. I’ll admit I don’t use it very much but when I do, my god, it gets it wrong.

On my boss’s answerphone me saying “I guess you’re not in the office” was automatically transcribed by voice recognition software as “I believe in South African liberation”, which I do, sure, but was definitely not what I was talking about. The Google voice search app on my iPhone renders things a bit weird. Sure getting results for “trucks” when you said “chocolate” is lols, but it’s not useful. The recognition just doesn’t seem to be good enough to work reliably.

Siri’s voice recognition technology is made by a company called Nuance. We hope it’s good.

The app is free, and Siri make money by taking a small cut of what you book or buy through it. It’s on iPhone, Blackberry and soon Android.

Okay so this is the offical start of our campaign to get this wunder-app over here: COME TO THE UK SIRI. We’ve also founded a  Facebook group by the same name – join and get the Siri UK ball rolling.

Hopefully we’ll get to do a more detailed review soon…