Yesterday we reviewed new make-your-own mobile social network site Shoutem. It’s just come out of beta, today, we talked to their CEO Crotian entrepreneur Victor Marohnic who told us about why

SS: What gave you the idea to make Shoutem?

VM: We built two or three social networks in Croatia, but there the total population is 4.5 million so a good network will get at most 100,000 users, it’s not enough to make a profit from advertising. Small networks with say a couple of 1000s of users won’t be able to pay for the developers they need to set up.

Ning already makes social networks, so we worked out what will come after Ning, and it realised it will probably be something mobile so Shoutem is like a mobile Ning, a white label social network.

SS: How long did it take to build it?

VM: We started on this two years ago with just 2 or 3 of us full-time, then we got money from seed funds after a lot of buzz from press releases, so then we had a team of 5 or 6 working on it. We’ve achieved a lot in a short time.

SS: How do you make money out of it? What’s the business model?

VM: Yes, it’s a freemium model taking the same form as Ning or WordPress. We’re not currently charging for any services on it but we will bring that in, in the next month or two. Otherwise we’re looking at branded applications – we could help our more successful social networks develop branded apps [instead of hitching on the Shoutem one] maybe sharing the profits 50/50 with the network owners in a similar way to meetup.com’s model.

SS: What sort of people use it? Any interesting or surprising uses of Shoutem so far?

VM: Well we expected a lot of niche networks and that’s what we’ve got: blackberry users, football fans, people in one city or town, or even different language groups. We might have expected to have more small language groups, but currently 90% of our users are from America and nearly everyone is using English. We expect to see more networks based around location and perhaps even very small networks like a family.

SS: What are the plans for the future?

VM: We’re working on the Android app and integration with other social networks – Foursquare, Gowalla, Facebook fan pages and Ning. A lot of Ning users are using us to handle the mobile side of their social networks, then they plug us back into the Ning web interface.

We also want to make a plugin for WordPress, a tool that WordPress site owners could link to a community network on their site. We’ve noticed that people like to integrate social networks with other complete packages: offering news, video and then a social network behind it.

Like the Ranch&Rodeo radio station on our site for example, which is a social network based around content. We want to make it something really simple, something any WordPress blogger could set up. 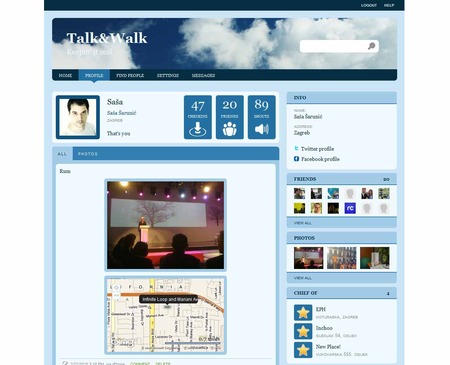 See also: All You Need to Know about Shoutem