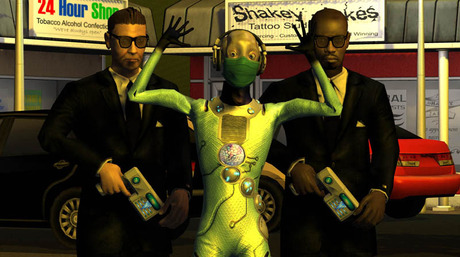 Fancy directing a film but don’t have cameras, actors or a film crew? Well new site Moviestorm offers off-the-peg animation. If you’ve got a story to tell then you can use their SIMs-like sets and characters to creat a short film.

Download the Moviestorm platform for free then you can choose from a range of backgrounds and characters, then you can accessorise them and input a script. The computer-game style interface makes it pretty straightforward to understand.

It’s not dissimilar to Xtranormal, which we reviewed here though seems to be capable of doing things that are a bit more complex.

I’ve just watched one of Moviestorm’s success stories and gotta say it’s pretty good. The director/writer has obviously found a way to work with the limitations of the set-up.

What are the main limitations? the faces on the computer generated characters aren’t a strength so pointing the camera at other things while they talk looks good: roving over skylines or following wires round corners. For example. Again character movements can be a little stilted so doing interesting stuff with the camera shot (focussing on shadows for example) instead just pointing it at the characters provokes a great sense of tension.

Here’s a video showing how it works:

Interested? get going! instructions on using the site here. And it looks there are communities & forums set up around the films if you need support.