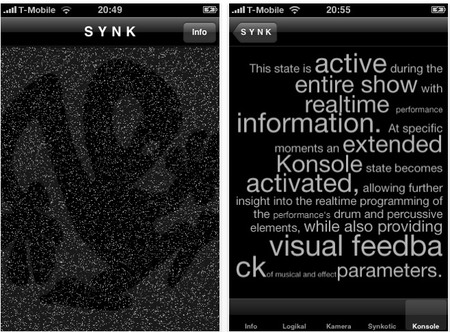 Is it a publicity stunt? is it a completely new way to make music? or is it just lots of people waving their phones around at gigs and making annoying sounds?

A Techno DJ has crafted a new kind of DJing performance that uses an iPhone app to let the audience interact with the music.

Canadian DJ Richie Hawtin has launched an iPhone app SYNK that you can use at special gigs to chip into the show. Big concept – it could be amazing or just gimmicky. Wish I could review this properly but that would involve going to one of the 12 gigs that he is putting on. The first one is in Germany on the 27th March.

In the meantime: let’s just say the
For example at one stage during the gig, viewers can re-organize the word samples using a user interface of 20 touch buttons on their phone’s screen. At another stage they can watch a video stream or monitor the percussive beats.

BUT: even if you can’t make the gigs. You should download the app. It works while gigs aren’t on either – by providing amibent sound and visuals that react when you shake the phone or speak into the microphone.

It’s like someone is remixing your speech in echoey bass. More weird and trippy than something you’d keep coming back to – worth a download because it’s free.

This is how the describe it?

“In between the performances the SYNK application will be in sleeper mode and function as a Plastikman atmospheric location shifter. By using visualizations inspired by Derivative, combined with the iPhone’s built-in microphone and accelerometer, users are immersed in a Plastikman environment.”

Um. Will it catch on? Well it will fundamentally change gigs if it does.