When is the next 36 bus? It’s the sort of question that drives you crazy when you’re waiting for it, and hardly anything can tell you the answer. Especially not the strange man in the corner of the bus shelter kicking the wall.

Well you guessed right – there’s now an iPhone app for that. For those bus stops that don’t feature helpful time displays, there is now the NextBuses iPhone app, telling you when the next bus is.

Using information from Traveline’s NextBuses service, which already exists in SMS and WAP-based form, it mixes scheduled and real-time (where available) information based on the user’s location.

NextBuses covers 370,000 bus stops throughout England, Scotland and Wales. Though if reviews on iTunes are to be believed, the coverage could be a little patchy outside the main cities. One iTunes reviewer complains: “The app by itself is good… if there were any information it could give you. I haven’t found one bus stop yet that has any departure info.”

Still strong reviews from elsewhere. And at 59p it sounds worth it if you’re a regular bus user.. 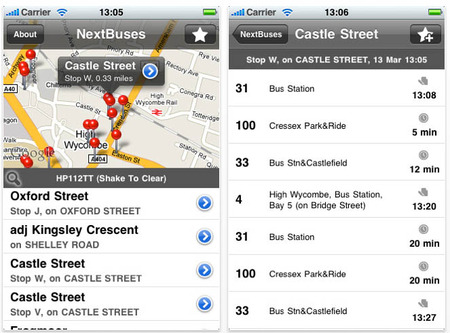