If Buzz is going to copy FriendFeed I wish it would do it properly.

And that means introducing collapsible comments as an utmost priority. I always miss what my actual friends say on Google Buzz because it is swamped out by the few big names I follow who get hundreds of comments on each one of their posts. Yes okay I could list my friends and separate the personal from the professional feeds, but I don’t alright. It just doesn’t happen like that. (Well okay I will, but it should be possible for Buzz to be usuable without having to do that.)

Here’s the Friend Feed way – comments posted are shown according to recency, relevance and how well rated or replied to they have been. Okay there were only 6 on this particular post but witness they have been collapsed. 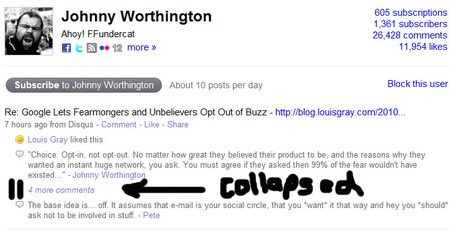 And the Buzz (Guzz) way. This is after I zoomed out my Gmail to about 20% its usual size. (And yes I do have the ninja theme). 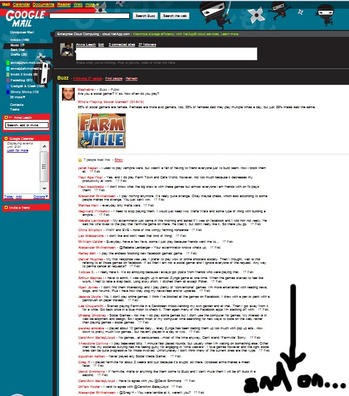 Do it Google, and while you’re at it, they have some great share buttons over on FF and it would be handy if you could incorporate them too….