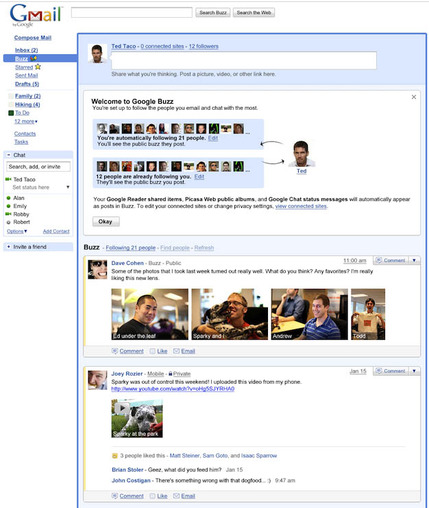 Google’s new social networking site Buzz launched last night and bills itself as the best way to “share interesting stuff”. On Google’s official blog they claim that Buzz will be a way of “organizing the social information on the web” and “finding relevance in the noise”.

So is this a generous contribution to information flow and “sharing” or is it a massive swipe at Facebook, the world’s most popular social network and Google’s rival?

I think we can take it as a swipe at Facebook. And duplicating what Facebook does is going to create way more noise, rather than less. The thought of yet another stream of status updates makes me slightly weak inside, and I love social media. I’m not that creative godammit.

Buzz builds out of Google’s successful email service – Gmail, giving it an automatic 170 million users….But much more than just adding a new feature to an email service: it really pushes Google directly into social network territory.

“If you think about it, there’s always been a big social network underlying Gmail.” the google blog goes “Buzz brings this network to the surface by automatically setting you up to follow the people you email and chat with the most.”

The meaning is pretty clear there: got gmail? – you’re on Buzz whether you like it or not. Since Buzz replicates a lot of what facebook does: status updates, lists of friends, picture sharing, I can only see this creating more noise rather than less. Okay it will be easy -coming straight of gmail and it can sync with Twitter, but where Twitter does something slightly different to Facebook, Buzz really does do the same thing. Add in existing services Google Reader and Google Docs and I guess the idea is that you could spend a whole day on the internet without leaving your Gmail account. I’m sure that would make Google very happy…

One thought on “Google Buzz: it's a knock at Facebook and if I have to look at another stream of status updates I'm going to start grinding my teeth again”