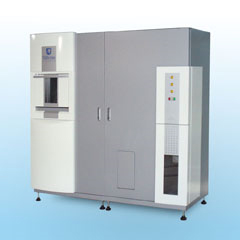 I’d heard of pasta-making machines, but not toilet-paper manufacturing ones. But a Japanese company have taken recycling to a new level by making one.

And not only have they made it, they’ve called it White Goat which is a great name for a gadget and captures the chewing and masticating functions of the machine perfectly. Put paper in one end and it is shredded, mixed with water and turned to a pulp and deposited out the other end as loo roll.

It’s not an instant solution so if you’ve run out toilet roll, you’ll have to wait for half an hour before your copy of the Guardian sports section becomes usuable in its new form. In fact, this isn’t really intended for private use: more for big office blocks with a large turn-around of printer paper: it takes 40 sheets of A4 to make one roll.

As Geekwithalaptop say: this would be a good gadget to have around in a company where security is important. Yes, no matter how interesting that document I doubt anyone will be dredging it up after it has made its way into the sewer system.

How comfortable is the loo roll produced? We imagine it’s not Andrex but surely the warm glow of doing the right thing by the environment must counteract any scratchiness.