“You are not a Gadget: A Manifesto” is a book by internet guru, musician and author Jaron Lanier published a few weeks ago. The American version of the cover is pretty beautiful (thumbnail to this article, but the English version is even more striking: it’s a fake e-reader: 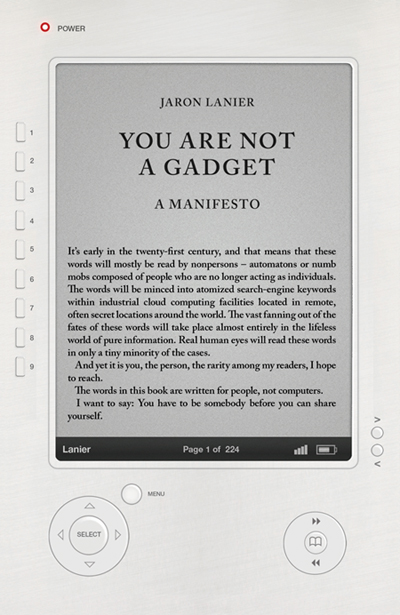 Gorgeous though it is, I don’t think I’ll be buying it. I haven’t read Lanier’s book, but I have read articles summarising his argument and a couple of reviews, and I think reading it would annoy me deeply. Lanier thinks that the Internet started off as a digital paradise (he would know, he was one of the people there at the beginning) but turned bad and useless. Mob rule and hive mind have replaced collaboration and individual creativity and blah blah. He thinks that Wikipedia is medicore and that the worm of commercialism has entered the apple of And that creativity has been destroyed by copy and paste culture.

In conclusion, the internet’s open culture doesn’t work and the net has lost its flavour. This guy seems annoyed that what was once the preserve of the geeky elite is now the world’s playground.

Slate, in their review call him a “romantic snob” – I agree. Romantic in the sense of “a believer in individual glory” rather than anything to do with love.

It’s always useful to have voices in the wilderness upsetting mainstream orthodoxy and getting us to reassess the status quo, especially ones that are as well-informed as Lanier. But snobbery? that’s never useful.

Well, if you are interested: You Are Not a Gadget is here, £14 on Amazon