Launched at the beginning of 2010, site 15tofame aims to make that well-known Andy Warhol saying finally true – “In the future, everyone will be world-famous for 15 minutes.” You could say that TV programmes like Big Brother have already recreated the American pop-artist’s vision, but 15tofame.com takes the prediction even more literally. 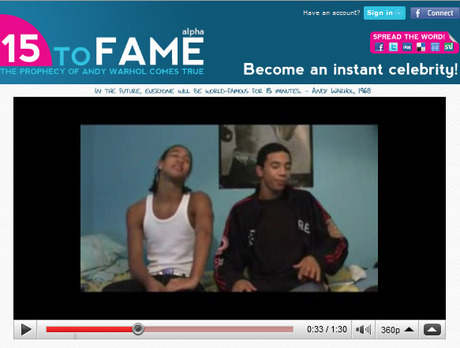 The result is a site that shows one video at a time for 15 minutes. The videos are uploaded by users who want to show the world that they are good at something. They include people singing, dancing and a sweet Norwegian boy on a unicycle. Like a lot of Youtube, yes. Viewers can clap the video, videos with the most claps end up at the top of the wall of fame. The videos aren’t stored on the site, but, they do have to be on Youtube to be uploaded so, on the Wall of Fame, an image and a link to Youtube is stored in perpetuity, so the videos can still be viewed after their 15 minutes expires.

Founder Stefan Mendicino explains: “everyone will use his 15 minutes of fame to show to the world their talent or simply to tell to the world what they want. It’s almost an extension of Anthony Gormley’s ‘One and Other’ project on the Fourth Plinth in Trafalgar Square, London. Only this one might never end…”

Though it seems counter-intuitive to make a site which only shows one video at at time, limits can actually work well. Twitter with its 140 character limit is the most obvious example. And for a start-up to compete with the variety and number of videos Youtube would obviously be a bit foolish. So they’re doing the opposite, filtering content right down to make the gems a bit easier to find.

Check 15tofame out, let us know what you think.