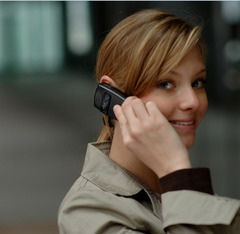 British women would rather lose their boyfriends than lose their mobile phones, according to a survey which polled 4000 women.

Mothers, then photos were the top two most treasured “possessions” of UK women the survey revealed, followed by mobile phones at three, best friends at four and boyfriends coming in fifth. 40% said they would be devastated to lose their mobile phone.

It makes sense – no boyfriend yet encountered comes with your personalised address book stored in his memory nor a storage and display facility for the photos you took at your birthday party and the hilarious text your sister sent you. Like Beyonce tells us, some things are more replaceable than others.

The poll by Borro, a British pawnbrokers, may not be the definitive last word in what matters to modern women: children didn’t make it onto the list, which suggests that only younger women were polled.

Men can be reassured that they came above diamond rings, laptops, pets and hair straighteners.

From a tech point of view – it’s also interesting that phones come several places above laptops, even though laptops are usually more expensive than phones and are likely to contain more personal information. Perhaps that’s because it’s easier to back-up laptops so even if you lose your computer the chances are you’ll have the information stored somewhere else. Perhaps it’s because you build up a more personal and significant relationship with your phone because you spend so much more time with it.

The survey only confirms the importance of phones in the tech world for 2010 – they’re not just popular, they’re loved.