While people all across the world are going weak-kneed and starry-eyed at very thought of the Apple tablet launch later today, some cynics remain. Cynics who say “meh” at the prospect of Apple’s wundergadget, people who suggest that this web-ennabled handheld device may not be strictly equivalent to Jesus in the roll of human history. 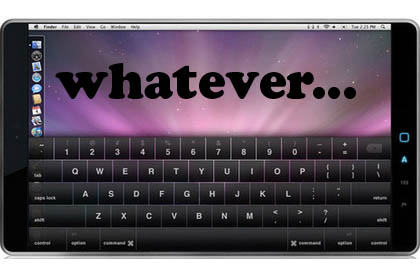 We outline four reasons to be cynical as proposed by writers across the blogosphere:

1. We don’t actually want a new way to interact with the web: Jeff Jarvis of the Buzzmachine points out that if Apple completely revolutionised how we connect to the web it would be really annoying and would invalidate previous formats.
“I cannot imagine we will end up with an entirely new format for media (in fact, I think that would be disastrous: Betamax and VHS on the internet).” he says in the Guardian. “Ultimately, I think we will look on tablets as just another way to get to the wealth of the web.”
He’s expecting a nice computer, but not a revolution.

2. Why would I want one? This is the “I’ve got a netbook and I’ve got a smartphone – I’m fine thanks” school of thought. People like argue that they don’t need another way to access the internet which will be too big to fit in their pocket but not big enough to type out a long email on. As mentioned on MacObserver.

3. Price. If this ends up being a netbook in albeit sexy Apple haute-design casing are we going to pay a rumoured $800 for it? Sure it will be beautiful but if it’s costing say twice as much as a more standard way to access the web, are we still going to keep shelling out for the Apple design touch? As articulated by Gizmodo:
“There’s just nothing to justify what will probably be a $700-$800 device here. Sure, it’ll be slick. It looks like something from Star Trek and when it’s announced, we’ll all want one […] but after the lust wears off we’ll be looking at a middle-of-the-road computer in fancy packaging that costs twice as much as comparable devices.”

4. It’s not going to save print media. Gadget fans won’t really care about this very much, but hopes have been riding high in the media industry that the Tablet will the be the err.. gadget in shining armour that will be able to save the print media and film industry from destruction by setting up a iTunes-like store for them. Certainly it’s likely that the Tablet will have high level media integration, but says The Register here, it ain’t gonna save them.

One thought on “The Tablet Cynics: four reasons why they're like "meh"”