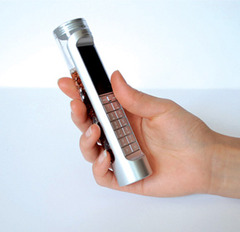 Couldn’t let this one go without comment – it’s a sugar-powered phone, from a collaboration between Nokia and Chinese designer Daizi Zheng.

Just pour in some glucose solution – or any sugary drink, Coke for example, and the phone runs for several hours – up to three or four times longer than a lithium battery according to Zheng. The phone produces water and carbon dioxide as the battery runs down, but then can just be recharged with a new shot of sugary water.

The concept is to use a pollution-free bio battery to replace the traditional battery. this particular bio battery uses enzymes as a catalyst to generates electricity from carbohydrates.

In this era of green-focussed technology, having a phone which runs off sugar is the ultimate in eco-bling. We’re not sure if the technology will become widely available, but certainly its application in places with poor electricity like that developing world could be really useful. Just don’t drop it or you’ll get Coke everywhere.

[from Daizi Zheng via Engadget]