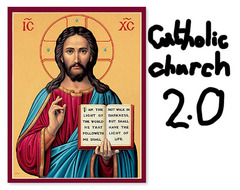 The Pope is taking God to the blogosphere, by ordering priests and cardinals in the Catholic church to blog and social network in order to bear witness to God in what he described as the world of digital communications.

In the Pope’s message today he said: “priests can rightly be expected to be present in the world of digital communications as faithful witnesses to the Gospel” through means such as “images, videos, animated features, blogs [and] websites.”

The move is specifically aimed at reaching youth, also globally scattered congregations. The Pope even suggests that priests should be trained in social networks and digital communication as part of taking Holy Orders: “[Priests] will best achieve this aim if they learn, from the time of their formation, how to use these technologies in a competent and appropriate way, shaped by sound theological insights and reflecting a strong priestly spirituality grounded in constant dialogue with the Lord.”

So they may be taught the golden rules of Twitter and the art of the ReTweet as well as the 10 commandments and sermon-crafting.

But they don’t need to get too good at it – “Yet priests present in the world of digital communications should be less notable for their media savvy than for their priestly heart..” the Pope added.

I can only say I’m looking forward to this. As ReadWriteWeb point out, it does mark an about-turn in the Pope’s attitude to the internet and the mass media which he has previously denounced as a poisonous influence that numbed morality and sensitivity. “‘It recounts, repeats and amplifies evil,” he said, “making us accustomed to horrendous acts, desensitizing us and, in some ways, poisoning us.” That was the message the Pope had for the world last year on the 43rd World Communication Day, a day when the he traditionally reaches out to his flock and speaks about spreading the message.

Get ready for a new type of tweet, one witnessing (twitnessing?) to the gospel.