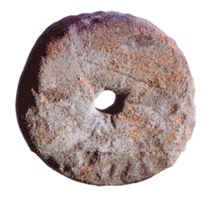 Apple have got us all thinking that the Tablet is going to be the biggest product launch since some hairy guy in a ferret skin whipped out the first wheel back in BC something-or-other.

Apple are hype maestros, working the media and the internet into a frenzy of expectation with the slightest of touches. Of course it’s the lightness of touch – the lack of hard information that gets everyone so stir-crazy with expectation in the first place.

Incredible though the wheel is, and the fact that it will probably go down in history as more significant than the Apple Tablet in the long-run, I bet that the Tablet beats the wheel for hype around its launch, hands-down.

I wonder what the unveiling of the wheel was like…? I’m imagining a low-key press release:

“After we finish skinning this boar we’re going to unveil a very special product, we hope it will change how people interact with the world. We’re not revealing any hard specs until the actual time of the launch which as we mentioned will be after we scraped the fat and meaty bits off the hindquarters of this boar, but we can safely say it’s made from that log over there and it’s going to be round.”

“I’ve made some great things out of logs before but this is the best thing yet. It may also be available in rock.” The inventor added. “Come see our latest creation.”

The PR would have had to just stand next to the fire and say that out loud, because they didn’t have Twitter in that by-gone era. How hype existed before Twitter, I hardly know. I guess you just bumped into people in the forest and told them what was going on. The inventor of the wheel would have pulled it out, rolled it backwards and forwards a bit then everyone would have gone back to scraping things and chewing boar fat. I imagine.

At the conclusion of the hype battle: Apple Tablet -1; Wheel – 0
We can’t do a scoring on usefulness to humanity yet, might take a few millennia for us to evaluate that properly.

One thought on “Opinion: Apple tablet – most hyped product since the wheel”