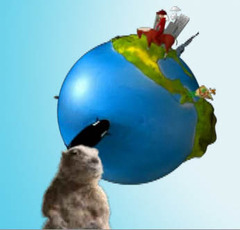 You remember the Dramatic Chipmunk? The little rodent whose dramatic head-turn and wild-eyed stare paired up with a dramatic chord to make possibly the best 5 seconds of animal video ever? Of course you do. Here he is:

Anyway, LG, the makers of phones like the Cookie and the Chocolate have released a viral video campaign which frees the chipmunk from his banal glass cage and sets him off to the Carribean and err, Bristol. There will be five videos in total which drive traffic through to a site www.liveborderless.net where LG fans can sign up for a competition which will send the winner on a trip around the world in 80 days with $100,000 in their pocket. Nice huh?