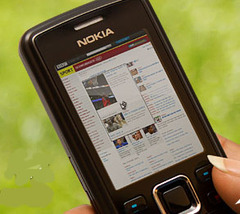 Facebook usage shot up 600% over the last year on mobile phones, says mobile web browser, Opera Mini. Twitter made gains as well according to the browser’s stats – being the fastest-growing social network on the mobile web, surging more than 2800% in just one year.

Opera Mini is a mobile web browser and records hits to different sites that people access through it on their phones. Their stats don’t not include sites people accessed through other browsers like Safari or Internet Explorer or through apps. Their figures do show a strong trend towards the big social networking sites at the expense of local ones like Russia’s VKontakte (still very popular however). Facebook is now the most popular social networking site on the mobile web.

Opera Mini is popular on Nokia handsets and compresses the data sent by 90% to make internet access faster and cheaper.

Their strong base in Asia, from being embedded on Nokia handsets, shows Opera is part of an explosion of mobile web usage in countries like Indonesia and China. From December 2008 to December 2009, page views in the top 10 countries of Southeast Asia increased by 599%, unique users increased by 385%, and data transferred increased by 587%.

“Four years ago this month we released Opera Mini to the world,” said Jon von Tetzchner, Co-founder, Opera Software. “Fortunately the divide between the mobile Web and the Web accessed on PCs is now disappearing. People want to use the same sites, regardless of whether they use a phone or PC to access those sites. The success of Facebook and Twitter among Opera Mini users shows that consumer habits do not change even though their devices do.”