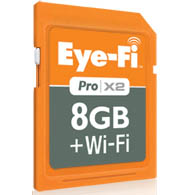 We covered the cunning digital image storing and sharing card before when it launched in the UK a few months ago, now news comes that the updated version of the Eye-Fi card, the 8GB Eye-Fi Pro X2 will arrive in the UK in April.

Eye-Fi memory cards work like normal SD memory cards – slot them into your camera’s memory card slot and they give you lots of extra storage space for images and videos. What makes Eye-Fi special is that Eye-Fi cards are internet-ennabled.

Put them somewhere with a wifi connection (one that’s either open or that you’ve logged into) and the Eye-Fi will go about uploading your new work. Users can set the account settings on the central Eye-Fi website and uploaded photos are sent from there to up to photo sharing sites, including Flickr, Facebook and Picassa.

It works with pretty much any camera with a SD slot.

The new Eye-Fi cards the 8GB Eye-Fi Pro X2 – unveiled at CES do just a little bit extra too compared to the previous top of the range Eye-Fi Pro. It can now upload to up to 25 photo-sharing sites, geo-tagging has been improved and a new feature – Endless Memory – means that the card will never get full. When the card reaches a certain level of memory, Endless Memory deletes files that have been safely uploaded, starting with the oldest first.

Eye-Fi In Endless Memory mode users can choose to have Eye-Fi automatically make space available on their Eye-Fi Pro X2. Using the card’s ability to communicate with the Eye-Fi Service, it receives confirmation whenever photos and videos are safely delivered to the user’s computer and/or online sharing site. When the card reaches the user’s pre-determined amount of space used, it will remove files that have been safely uploaded, beginning with the oldest – even when the card is not connected to the network. If files have not yet been uploaded, the Pro X2 will not remove them. This option can be set up in the Eye-Fi Center.

See the Pro X2 specs on the Eye-Fi US site