Given that BBC are coming under flak for the the license fee at the minute, with a possible cuts if the Conservatives get in at the next election, they could do with a few ways to get us to love the license fee.

How about a customisable viral video? That’s the tactic that the Swedish public brodcasting body are going for, and I’ve got to say I like it. The video reminds people what’s good about nationalised tv – that it represents the voice of the little guy. Who’s the hero of Swedish TV? It’s you, literally. Upload a photo of yourself and it shows up in the film.

Geddit? Public service broadcasting is 4 U! For example this is a screengrab the climatic moment when the stern Hilary Clintonish Swedish lady reveals Sweden’s hero: 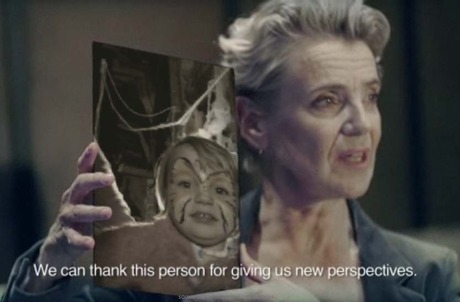 You too can be Sweden’s national hero.

I suggest the British government stop spending all that money on the fire-and-brimstone letters they send out accusing people of not paying the license fee and start making cute viral videos. Immediately.